Having been out of work for some time now, the cabin fever was setting in pretty hard.  Between having no income yet still spending gas to get to job interviews, there was no gas to just get away for pleasure, a break from the monotony and certainly no funds for entertainment.  I needed to feel useful again, productive.  That is when I came across a request in the local paper for volunteers to help that coming weekend on a project to build an artificial reef in the area.  I’m a nature lover and have always been interested in (and often active in) conservation efforts – how cool was that?

After e-mailing the listed contact for details, I was excited to get to work – even if it was for free.  I let a friend of mine know about the project and he was on board as well.  That Saturday, he picked me up early and we went out to Harbour Pointe on the inlet where several tons of oyster shells were ready in large barrels and on sheets of plywood in huge piles. 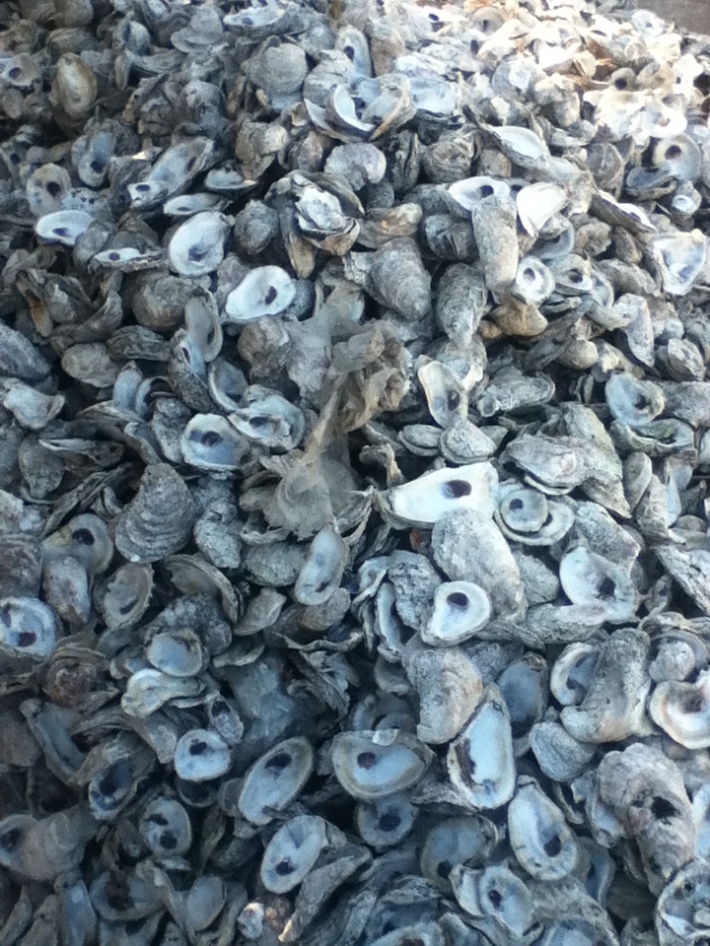 About 20 other volunteers showed up and we were given a brief primer on the task at hand.    We organized ourselves into each area – shoveling, bagging and tying off.  I shoveled shells into smaller buckets while my friend bagged and tied them.  They were then loaded onto a truck to be moved to their final resting place in Wildcat Cove. 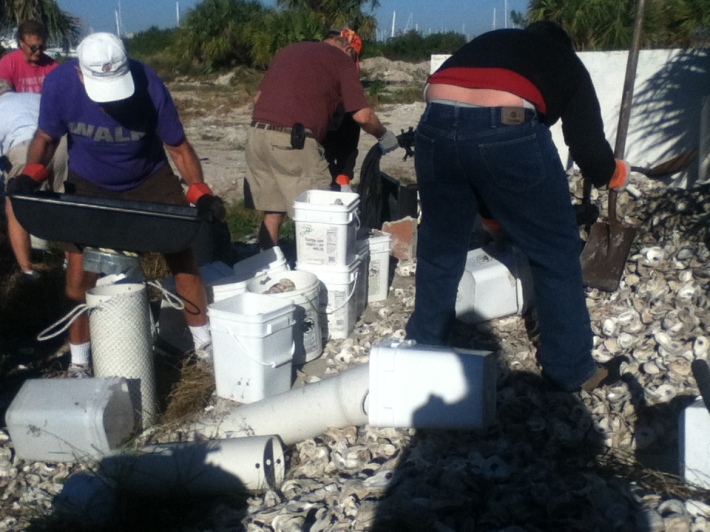 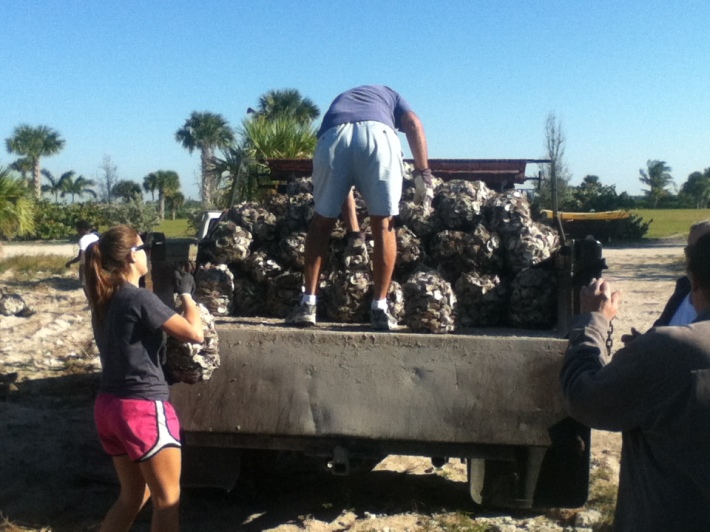 During a break in which bottled water and other drinks were provided, the leader of the operation and a colleague commended us all on our efforts which far exceeded their expectations.  In just about 2 hours, we’d already assembled about 400 20-pound oyster bags for deployment.  My friend and I stayed for a 20-minute informational lecture about oyster reefs, their local benefits, lots of statistics and zoological info as well.  We broke for lunch then and would meet up at low tide a few miles up the coast at Wildcat Cove.

Upon arrival at Wildcat Cove, we found the oyster bags in a neat pile in front of the canoe launch.  Another 100 bags had been assembled and brought up in two deliveries.  It took a little brainstorming as to how we were going to get the bags to the reef area, but one adventurous girl with her own kayak said she could pull floating tubs of about 30 bags per load out to the location.  There was some interesting trial-and-error in getting the system going, including one thankfully good-humored man getting impossibly stuck in the thick muck at the bottom of the river.  It took more than ten minutes to get the river to release his legs and he lost a shoe, but we got him back safely!  Note to self: Don’t go into the water without a boat here! 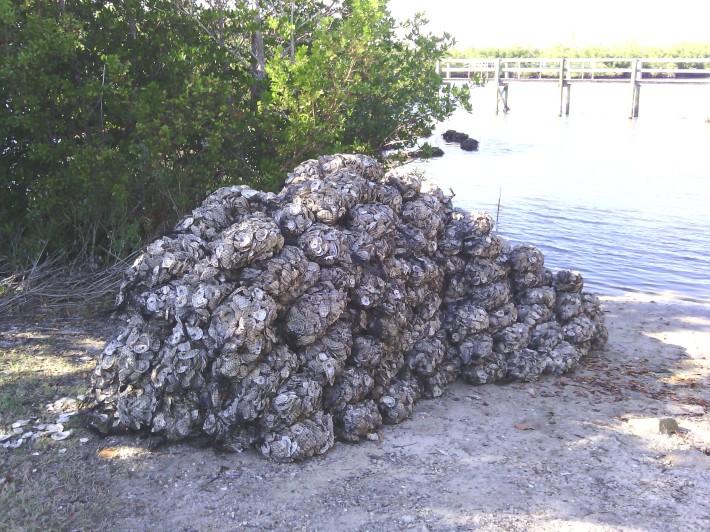 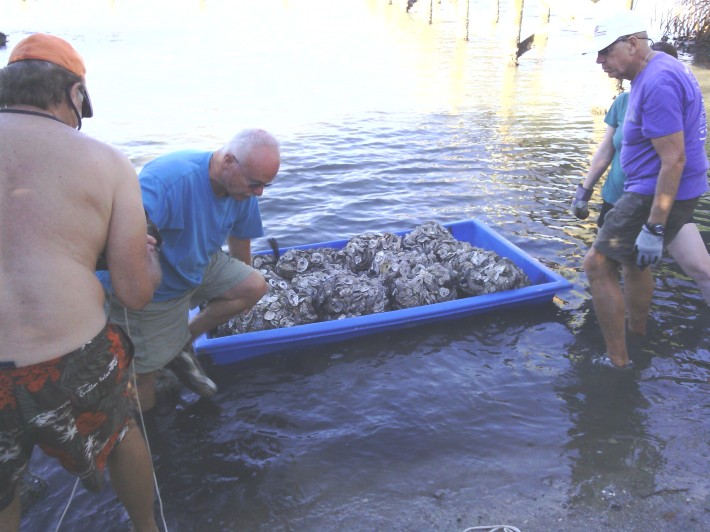 Once we got the production line going, the rest was – pardon the pun – smooth sailing.  Bags were floated out to a mangrove area where a 4-foot high oyster “wall” was built staggered around the mangroves.  Once settled and cemented, these artificial reefs will provide settling places for new oyster spawns, as well as providing habitat for young fish and feeding grounds for birds such as herons, ibis, loons, cormorants, anhingas and more. 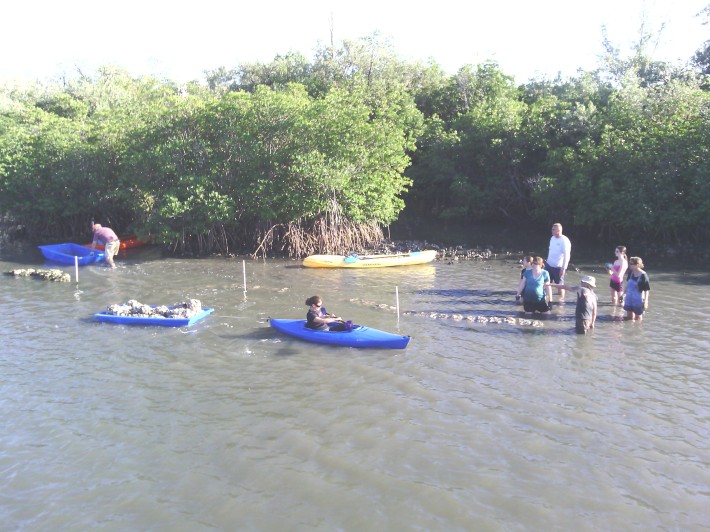 I remain in contact with the organizer of this effort who works for the county in coastal restoration and he is helping me network with other people in the field so that I may actually find work in conservation or a related field.  Even if it is a desk job, it would be a great opportunity (and has been) to do something productive in a field I really enjoy.  Another reef build is coming up in two days.  This time my daughter will also be involved, getting her hands dirty and having a positive impact on our local, unique and delicate ecosystem.